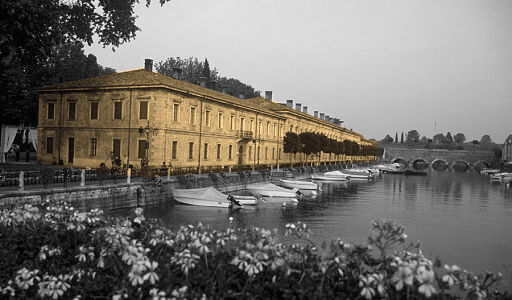 We recommend beginning your visit from the parking lot west of the Fortress, near 1. Porta Brescia.

The imposing sixteenth century fortress is protected by a moat, which was a branch of the Mincio River.

Cross the eighteenth century Bridge that leads you to Porta Brescia and after the gate you continue on to the right and there you will find the majestic 2. Austrian Hospital built in 1866, that became a military jail in the same year as the construction.

To the left you will find the old parade ground, now called ‘Piazza Ferdinando di Savoia’, with St. Martin`s Church and you may also observe archeologically excavation which have revealed 3. Roman ruins from I-IV A.D.

On the southern side stands the 4. Rocca Complex. It was originally a late Roman structure, which was fortified by the Scaligeri family in the thirteenth and fourteenth centuries. Venetian turned the castle into an arsenal in the sixteenth and seventeenth century, and the Austrian also used it between 1837 and 1861.

From the majestic seventeenth century entrance, one sees the imposing Knight of the Castle’s portal made in 1575. In the basement of this part of the fortress, the vestiges of the Scaligero Castle are visible.

From here you proceed to Voltoni Bridge, which was built in 1556 over Canale di Mezzo, the main branch of the Mincio River.

From the top of the bridge you are able to enjoy an enchanting view over the fortified city and the Mincio River.

On the left bank of the river is the square where the Austrian military head quarters were located, named ‘Parco Catullo’. The 5. Palleria Austriaca and the recently restored 6. ‘Artillery Barracks at Porta Verona’.

Outside the fortress you can admire the marble main entrance gate 7.Porta Verona with a statue of St. Mark’s Lion, (‘DISCE HAEC MONEAT PRAECELSA LEONIS IMAGO NE STIMVLES VENETI CEV LEO IN HOSTE VIGENT’) which was damaged by Napoleon’s troops.

From here you enter in Parco Catullo again and on your right you see 9. ‘Franciscus I Barracks’, today Police’s School.

On the west side of the Park you see the 10. ‘Parade Grounds Command Building’ also ‘Palazzina Storica’ (1854), where the Convention of 1917 was held. The 11. ‘Official’s Pavillion’ (1556) is situated along ‘Canale di Mezzo’, left to the Palazzina Storica.

Then you go down into the old town along via Roma and via Dante to Piazza S. Marco where the 13. Building of the Venetian Command is located. Afterwards you return to the parking of Brescia Gate and, if you want, you can continue on the ‘Montagni’ walking trail: which leads down to the Feltrin’s Rampart and runs along the moat, providing beautiful glimpses of the Fortress.

You can see 8e. ‘Cantarane’s Rampart’ (1551). And if you keep on following the trail you get to the cycle trail along the Mincio river.